There are different styles of painting like abstract art, conceptual art, Hyperrealism, pop art, Futurism, Impressionism and so on. As artists you can focus on single styles or a combination of styles.

Before we start painting we need to know WHAT we are talking about. I’ve often had people contact me for commissions and telling me they want it in a modern style. Once painted I have often realized that they misinterpreted the meaning and look of the style. It’s important to be able to identify what style you are working in and be able to explain what it looks like.

Realism, in which the subject of the painting looks much like the real thing rather than being stylized or abstracted, is the style many people think of as “true art.” Only when examined close up do what appear to be solid colors reveal themselves as a series of brushstrokes of many colors and values.

Realism has been the dominant style of painting since the Renaissance. The artist uses perspective to create an illusion of space and depth, setting the composition and lighting such that the subject appears real. Leonardo da Vinci’s “Mona Lisa” is a classic example of the style.

As its name suggests, the emphasis is on the act of painting: the character of the brushwork and pigments themselves. Artists working in this style don’t try to hide what was used to create the painting by smoothing out texture or marks left in the paint by a brush or other tool, such as a palette knife. The paintings of Henri Matisse are excellent examples of this style.

Impressionism emerged in the 1880s in Europe, where artists such as Claude Monet sought to capture light, not through the detail of realism, but with gesture and illusion. You don’t need to get too close to Monet’s water lilies or Vincent Van Gogh’s sunflowers to see the bold strokes of color, however, there’s no doubt what you’re looking at.

Objects retain their realistic appearance yet have a vibrancy about them that’s unique to this style. It’s hard to believe that when the Impressionists were first showing their works, most critics hated and ridiculed it. What was then regarded as an unfinished and rough painting style is now beloved and revered. 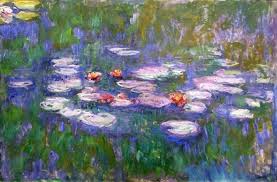 Expressionism and Fauvism ​are characterized by their use of bold, unrealistic colors chosen not to depict life as it is, but rather, as it feels or appears to the artist.

The two styles differ in some ways. Expressionists, including Edvard Munch, sought to convey the grotesque and horror in everyday life, often with hyper-stylized brushwork and horrific images, such as he used to great effect in his painting “The Scream.”

Fauvists, despite their novel use of color, sought to create compositions that depicted life in an idealized or exotic nature. Think of Henri Matisse’s frolicking dancers or George Braque’s pastoral scenes.

Abstraction is about painting the essence of a subject as the artist interprets it, rather than the visible details. A painter may reduce the subject to its dominant colors, shapes, or patterns, as Pablo Picasso did with his famous mural of three musicians. The performers, all sharp lines and angles,​ don’t look the least bit real, yet there’s no doubt who they are.

Or an artist might remove the subject from its context or enlarge its scale, as Georgia O’Keeffe did in her work. Her flowers and shells, stripped of their fine detail and floating against abstract backgrounds, can resemble dreamy landscapes

Purely abstract work, like much of the Abstract Expressionist movement of the 1950s, actively shuns realism, reveling in the embrace of the subjective. The subject or point of the painting is the colors used, the textures in the artwork, and the materials employed to create it.

Jackson Pollock’s drip paintings might look like a gigantic mess to some, but there’s no denying that murals such as “Number 1 (Lavender Mist)” have a dynamic, kinetic quality that holds your interest. Other abstract artists, such as Mark Rothko, simplified their subject to colors themselves. Color-field works like his 1961 masterwork “Orange, Red, and Yellow” are just that: three blocks of pigment in which you can lose yourself.

Photo realism developed in the late 1960s and ’70s in reaction to Abstract Expressionism, which had dominated art since the 1940s. This style often seems more real than reality, where no detail is left out and no flaw is insignificant.

Some artists copy photographs by projecting them onto a canvas to accurately capture precise details. Others do it freehand or use a grid system to enlarge a print or photo. One of the best-known photo realistic painters is Chuck Close, whose mural-size head shots of fellow artists and celebrities are based on snapshots.

“ Art is not what you see, but what you make others see.”

Tweet
Learn to Paint in the comfort of your own home

There are different styles of painting like abstract art, conceptual art, Hyperrealism, pop art, Futurism, Impressionism and so on. As artists you can focus on single styles or a combination of styles. … Continue reading...Painting Styles

Muddy paintings can be the bane of our existence. Frustration when mixing color hinders our creative process. It can even cause us to doubt our abilities. Would you like to be rid of mud in your work? Would you like to know how you created it in the first place?...

Step by Step Tutorial on how to Paint a Grisaille Portrait … Continue reading...How to paint accurately and get three-dimensional tonal values using dark and light

Paul Jackson Pollock was an American painter and a major figure in the abstract expressionist movement. He was widely noticed for his technique of pouring or splashing liquid household paint onto a horizontal surface, enabling him to view and paint his canvases from all angles

Art Legacy Live is a nonstop exhibition of the most notable masterpieces in six centuries of Art. A collection in motion where the most notable paintings in the world reveal their depth and perspective.

Hi-Fructose was founded by two artists by the name of Attaboy and Annie Owen in the year 2005. It is a magazine that is published quarterly. The art blog part is headed by Andy Smith. Hi-Fructose revolves around contemporary art and showcases the best artists of recent times. There is no fixed genre that it emphasizes. Each post highlights the works of a different artist, focusing on one notable work. A typical Hi-Fructose post also describes how the artist came up with the idea and the process behind the creation of the work. The post contains information about the artist and his/her quotes. Hi-Fructose appreciates and celebrates original artwork and inspires new artists to come up with better works. The blog is full of talented contributors and readers can expect as many as four posts every day!

Colossal stands true to its name and is one of  the biggest art blogs in the United States. Launched in 2010 in Illinois, the blog publishes content about visual arts. Colossal covers a wide range of topics with the likes of photography, animation, design, painting, and drawing bossing the show. You can also find stuff related to installation art as well as street art. The blog is a vibrant collection of resources related to art, design, and visual culture. Colossal has a whopping fan following of more than a million followers on social media. The range of content is so diverse that it is fascinating. Head on to the blog and click on the ‘More’ section to see a variety of categories and topics that you can explore. Lastly, you can buy funky merchandise in the e-commerce section of Colossal.

It's not just a painting It is also a story

I have a story to tell... I tell mine, and our hearts connect.

This site uses Akismet to reduce spam. Learn how your comment data is processed.

Are you excited?Let's chat...
Learn more about Artist and Teacher Leonie.e.Brown
Scroll Up